Lama Zopa Rinpoche is a Tibetan Buddhist scholar and meditator who for 30 years has overseen the spiritual activities of the extensive worldwide network of centers, projects and services that form the Foundation for the Preservation of the Mahayana Tradition (FPMT) which he founded with Lama Thubten Yeshe.

Rinpoche’s vision is vast and includes the proliferation of many charitable and beneficial activities. Among many projects dear to Rinpoche’s heart are the two Maitreya Projects, which include plans to build two large statues of the future Buddha, Maitreya, in Bodhgaya and Kushinagar in India; The Sera Je Food Fund, which offers three vegetarian meals a day to all 2,500 monks studying at Sera Je Monastery in south India; Animal Liberation events around the world, at which creatures, big and small, are freed from immediate harm or blessed every year– the total number of animals liberated to date (by Lama Zopa Rinpoche or those inspired by him) is over 200,000,000 and counting! Rinpoche is also utterly dedicated to fulfilling the wishes of His Holiness the Dalai Lama in any way possible. 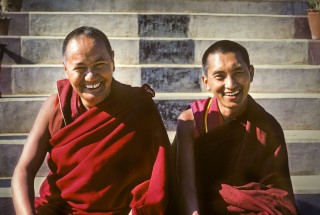 Born in the Mount Everest region of Thami in 1946, Rinpoche was recognized soon afterwards by His Holiness Tulshig Rinpoche and five other lamas as the reincarnation of the great yogi Kunsang Yeshe.

At the age of ten, Rinpoche went to Tibet and studied and meditated at Domo Geshe Rinpoche’s monastery near Pagri, until the Chinese occupation of Tibet in 1959 forced him to forsake Tibet for the safety of Bhutan.

Rinpoche then went to the Tibetan refugee camp at Buxa Duar, West Bengal, India, where he met Lama Yeshe, who became his closest teacher. The Lamas met their first Western student, Zina Rachevsky, in 1965 then traveled with her to Nepal in 1967 where they began teaching more Westerners. Over the next few years they built Kopan and Lawudo Monasteries. In 1971 Lama Zopa Rinpoche gave the first of his famous annual lam-rim retreat courses, which continue at Kopan to this day.

FPMT was established at the end of 1975. Lama Yeshe served as the organization’s spiritual director until he passed away in 1984, at which time Rinpoche took over. Since then, under his peerless guidance, the FPMT has continued to flourish.